After staying nearly two weeks in Montana, we spent 16 days in Canada visiting the National Parks of Banff, Yoho and Jasper along with some beautiful provincial parks. We crossed over from Glacier National Park into Waterton and stayed the night with gracious friends in Cochrane. We drove south the next day for our one reserved campsite of our entire trip, in Peter Lougheed Provincial Park. Our site was awesomely huge and private with gorgeous trees all around. The next morning was our ten year anniversary and we went back toward Banff to find a place to camp. We found a place at the municipal campground wedged between train tracks and a highway and it’s just as romantic as it sounds 😉

We went into Banff on our anniversary day where Andy skipped rocks at Lake Minnewanka, below. 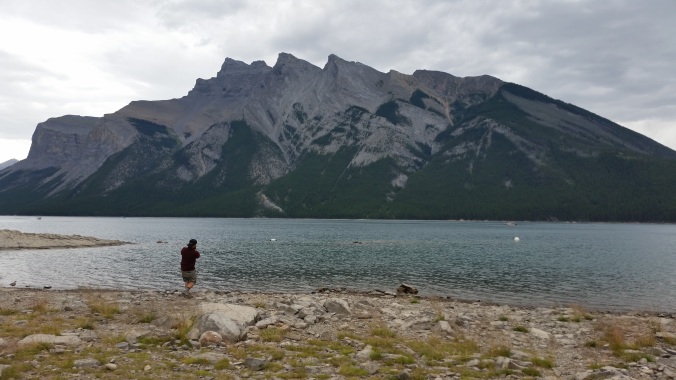 We went out for our anniversary at a little indian restaurant. Once back at our campsite, we opened a bottle of wine at our picnic table that we had been carrying around with us since we left MN two weeks earlier.

The next day we went to Lake Louise, along with hundreds of others.

We took a hike up from Lake Louise. The water looked greener and greener the higher up we hiked. We saw views like this:

I’m a big fan of lakes and Andy is a big fan of mountains. We were both happy in the Rockies. It was my first time to see most of these places.

The Banff park area was great and beautiful, and also very crowded. I prefer to be where the people aren’t, so we drove into Yoho National Park just west of Banff into BC, and we saw a whole bunch of pretty places. There was a natural bridge formed by a waterfall, Emerald lake was gorgeous and green depending where the light was hitting it. Takakkaw Falls was also in Yoho, a huge tall waterfall– everything seemed prettier with less crowds 🙂

Canada camping was some of the cheapest camping we’ve done on this trip. I’d like to thank the exchange rate for having some of our nights cost only $11. Snaring overflow campground just north of Jasper was one of my favorites, even without sinks, showers or flushable toilets. We were able to duck our tent into the trees a bit and had a great time! We had some amazing sunsets there. We kept laughing too, because for about 3 weeks in a row, each new place we camped we were right next to train tracks.

My home as a teen was next to train tracks so I felt right at home. We must have been following the Canadian railway system closer than we realized. I offered Andy earplugs at night.

If you get a chance to visit the Banff and Jasper area, I highly recommend Yoho and Kootenay is the other national park nearby too. Even though we didn’t get to the last one, I bet it is just as nice at Yoho.