To understand the significance of me hiking Beehive Basin, I need to get one thing out of the way first. I have to give an accurate picture of how out of shape I am. I have never exercised more than three times in a week– actually, I’m probably being generous there- let’s say twice in a week. And those occasions were extremely rare. Like the times that I’ve exercised twice in week has happened maybe…. 10 times in my life. So yes, I am the person who gets winded walking a steep flight of stairs just a little too quickly (read: at a normal pace). Okay, so that’s me.

Andy loves to hike, loves Montana and he loves Beehive Basin, a hike in Big Sky, MT. He calls it his happy place and recently had the mountain range of the Spanish Peaks (the range at the top of the hike) tattooed on his arm. It’s a place in the world where he feels most at peace and most himself.

Andy’s family has been visiting Big Sky since the 90s and this is a hike I have heard the whole family talk about often. On our first trip out here together 5 years ago I twisted my ankle the day before the hike so this year was my chance at redemption and to see what all the fuss is about.

Andy told me the hike was 2 miles, so I thought it was weird we had packed a lunch, but whatever. And let’s also be clear- this is not a difficult hike for probably most humans on the planet. People in their 70s were passing me. I’d like to blame the elevation (a gain of 1600 feet up) and the length (turns out it’s between 6 and 7 miles total) or the time (I think we were gone for 6 hours) and any other excuse that sounds reasonable, but really, I’m just out of shape.

At one point when the hike got hard I looked down and I saw my arm. I saw where I had my brother’s signature tattooed a couple months ago. His writing was taken from a card he sent me years ago. My dad calls it, “the perfect Justin scrawl.”

We were in a flat part of the hike and I had gotten ahead of our little group of me, Andy and his mom and dad. (Which, PS, my in-laws can do this hike in their sleep. They kindly slowed down so I didn’t feel like I was the one constantly stopping us, though at the beginning, I most certainly did.)

Anyway, I looked at my arm and thought of my brother. And I also thought about his death. I thought about his last breath. And I reminded myself that I was alive, I had air in my lungs, and I could do this hike. I could keep going even when it was tough.

My brother doesn’t have breath in his lungs anymore, but when he did, he wanted to keep on living. It wasn’t his choice to die. So I kept going because he can’t. I thought of him and cried because I missed him. I cried because sometimes it’s hard to believe he’s really gone. I cried because I hate that he’s gone.

I was glad I had on sunglasses and was a ways ahead of the group for these thoughts and memories. I was cruising at this point, having something else to think about and focus on probably helped. Andy actually had to call out to me to stop because it wasn’t safe for me to be by myself in bear country.

After a while of processing all these thoughts and continuing to push myself further than I thought I was capable of, I stopped to take a picture of my arm. But the rear facing camera was on which made me laugh (because when is that ever a flattering angle?), so I grinned and got this one first.

I switched the camera back to get a picture of my hiking motivation, my brother’s signature complete with a little heart and arrow he used to draw when signing his name on cards. 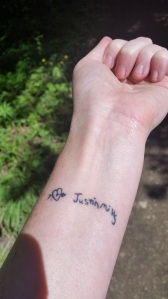 I felt my brother’s presence with me on that hike which made me smile because I don’t think that hike would have been his first idea of a good time either. I got brave at one point and asked him what he thought of me doing this hike. He liked to tease me for being what he called, “unathletic” for well, my whole life. And when I asked what he thought, I only heard four words back, “I’m proud of you.”

And yes, I sobbed exactly like a woman talking to her dead brother’s spirit on a hiking trail.

When we got to the lake at the top and were rewarded with an up close view of the Spanish Peaks, I felt glad I had done something that was hard for me. And I noticed another feeling. I was proud of me, too.

3 thoughts on “A non-hiker hikes in Montana”