In between visits with family and friends we’ve had some good camping nights just the two of us. Our night in La Push, WA was especially fun because we weren’t even planning to go to Olympic National Park, but then, we did. And once we were over there, we needed to find a place to camp. There was a campsite in the woods not far from First Beach, but it was full. We drove past a place on the ocean that had cabins but it said no vacancy. Getting a campsite/room has often become my responsibility with Andy parking the car and saying, “go do your thing.”

I walked in and spoke to the woman at the counter. I mentioned I saw the no vacancy sign, but wondered if she knew anywhere we could tent camp. She brightened and said, “Tent camp? We have two spots left on the beach if you want to see them!” We did and we happily took one. The Native American reservation we were on limits spots on the beach due a big fire that happened there years ago.

The beach was beautiful and quiet with not to many other campers, and the roar of the ocean was loud. Andy walked up and down the beach first. He came back with some rocks he wanted to bring home to my step-dad who loves all kinds of rocks. Later, I walked up and down the beach and found one rock I thought was pretty cool. I put it next to Andy’s outside our tent (which was on the little rocks) near our tent pole so we could find them in the morning.

There was a beautiful sunset- the whole night was like a dream. Falling asleep to the sound of the waves was something I didn’t expect to do on this trip and it was amazing. 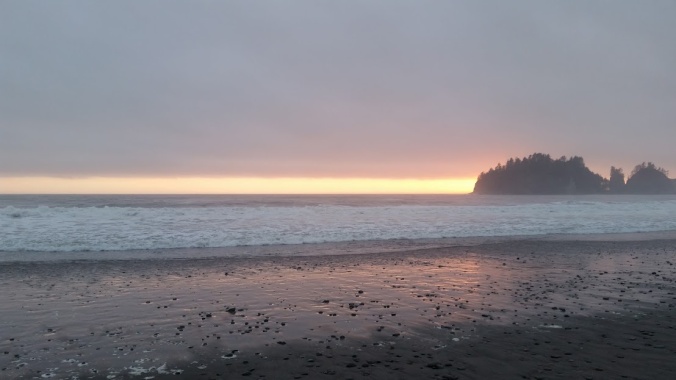 This was my view when I woke up the next morning! 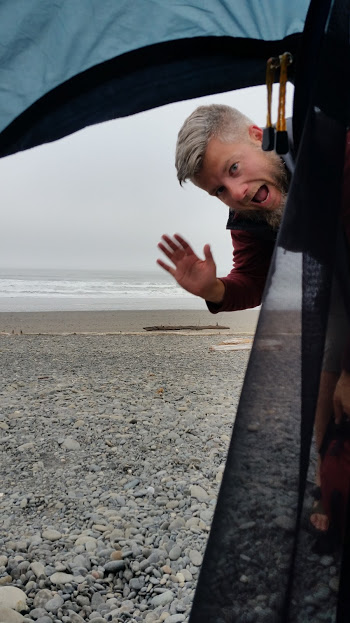 See all those rocks on the beach? They all look roughly the same. So when we took down the tent I didn’t think about moving our special hand-picked rocks. I bumped a pile with my shoe and remembered and went back to the corner we had placed them, I found Andy’s but not the rock I had picked.

I know this sounds silly, and it is, but I was particularly fond of that rock. It was mostly grey but had a big white spot on it with some pretty shiny parts going through it and it was-in my humble opinion- a unique rock compared to the others which was why I had picked it up. But that rock was nowhere to be found. It wasn’t with Andy’s rocks.

Andy picked his favorites to bring to my step-dad and helped me look for a little bit and then he headed back down over the creek, and across the logs with most of our stuff to start loading the car. I let him know I was going to look a little longer.

And then I did something even sillier. I prayed about it. I said, “Okay God- I know this is just a rock and I know there are far more pressing things in the world than this rock so I completely understand if you don’t answer this prayer, I just really liked that rock, so if you wanna help me find it- cool, and if not- I totally get it.”

I stood there staring at the same hundreds of rocks, and I slowly started moving piles of them with my shoe back and forth and back and forth. They all looked the same. This went on for several minutes (I was dedicated) and then, all of the sudden, there it was. That same silly rock, mostly grey with shiny white. And how did I respond, like a normal person, perhaps?

I burst into tears.

It was a swell of emotion so abrupt I caught myself off guard. All I could think of was verse after verse in the bible where God talks about knowing every hair on our head, every tear that falls is kept in a bottle, the story Jesus shares about going to look for the one lost sheep or the lost coin, how very, very valuable each human is to God.

And to think that the God of this universe cared enough about me in that moment to remind me that He is with me, listening and loves me enough to let me find a special rock- well… that’s beyond cool. I can’t find the words to describe the feeling.

Side note here: I’m choosing not to read into this any further and wonder about all the hundreds of people that were praying for my brother to live and he died, but God gave me a rock?! I really don’t believe in the phrase “everything happens for a reason” because I don’t think it does. But I do believe “God’s timing is perfect.”

For one example, I look at my sister-in-law’s life now and though I wish my brother was still here- I can’t help to see that God is doing an amazing thing in knitting together her new family, in the way He provides for her, and for her daughter, and I can’t deny that God works through really crappy situations to bring good out of them too (my paraphrase of Romans 8).

Okay- but back to the rock. Honestly– what are the chances I could have found it again? Look at that picture! They all look the same- and maybe from God’s view of the earth all people look the same, but He can pick any of us out of the crowd and say, “Hey you- yes YOU, I see you, I hear you, I know you, I’m with you, I love you. Let’s spend some time together.”

We’re not unknown to Him. He’s with us, loving us and listening to us- even when we don’t (even when I don’t) remember that simple truth.

2 thoughts on “WA camping and God on the beach”