This park gets its own entry because we stumbled upon a beautiful place here. Andy and I bought the annual national park pass for this trip, but it turns out, you don’t need it for this park. There is no fee station at the entrance, but there was a visitor center just before the park. Since Andy and I have always learned something new and helpful at visitor centers, we don’t pass these up. A kind volunteer gave us a slew of options for places to see and we were on our way!

As is custom for our trip, Andy was driving and I was staring aimlessly and happily out the passenger side window when suddenly something caught my eye, I yelled, STOP! PULL OVER! I have to give Andy credit for this part, and maybe it’s because I hadn’t done this before, but he pulled over at the next pull out all while subtly questioning me at the same time with “are you serious?” All I could think to say was, I saw something pretty.

He parked and followed me back to what can only be described as a scene out of a fairy tale. Everything was lush, green, squishy and beautiful. There was a smallish waterfall with down trees all over and moss and old man’s beard was growing everywhere- on the big rocks, on the bark of the fallen trees across the water stream, on the ground. In a word, it was breathtaking. Once we arrived Andy said, “Oh wow.”

I’m not sure why I’m so fascinated by green things in nature and water in the form of lakes, oceans, waterfalls, brooks, streams, rivers- but I love it all. I was pretty happy in this place and was pretty content to gently explore around it. There were a zillion shades of green under a canopy of extremely tall trees.

There was no one else there, so we took our time in climbing and looking at everything from different views. It was so peaceful. The further I climbed the more little mounds I could see on the upper left side- it looked like a hobbit could come bounding out of one at any moment. I’ve tried my best to describe it with words, here are some pics that don’t nearly do the place justice. Probably because sunlight was streaming in making the place all the more magical and it was midday, or maybe just because I was just stepping around in awe, trying to capture with my little phone what my mind could hardly contain. 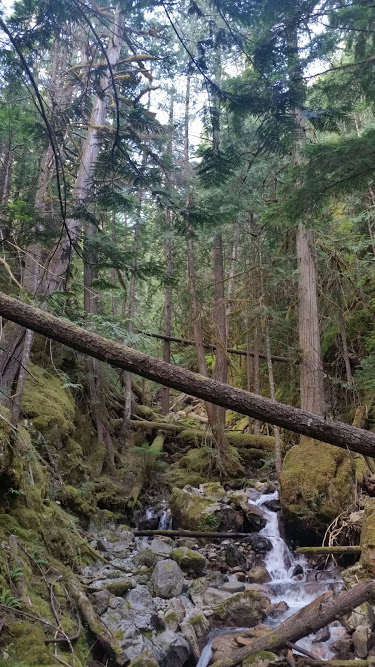 My attempt to capture a storybook scene 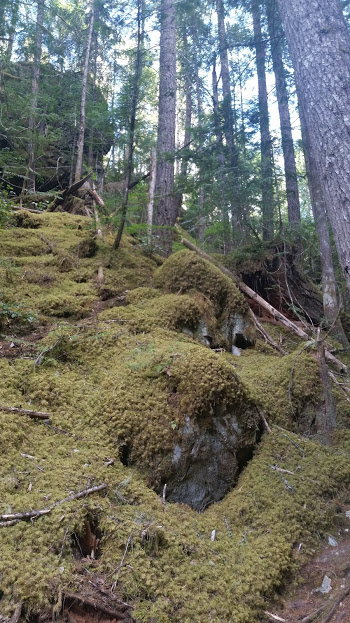 Doesn’t this look like a great place for a hobbit to live? 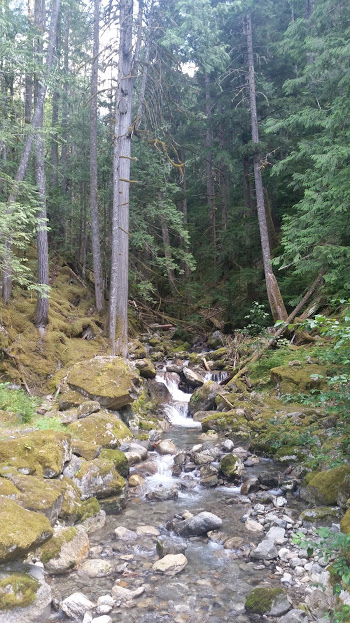 What I saw out the window that made us stop

We came about this place from the west entrance of the park and it’s near a sign that says “Pyramid Lake” in case anyone wants to scope it out. I don’t know if someone else would think it’s as cool as we did. I am, self admittedly, easily amused. But this stop makes my “favorite places” list of things we’ve seen so far on this trip.